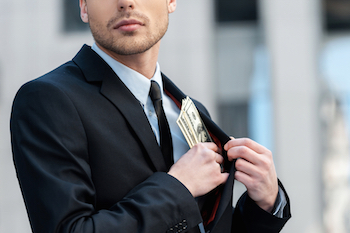 Embezzlement is a theft crime committed where the victim and perpetrator had a relationship of trust that was an important element of the situation. One of the most common examples of embezzlement is where an individual working at a retail store takes gift cards, pays themselves more than they have earned or otherwise uses their position at the business to steal something of value. It is the nature of the relationship between the people involved that separates this crime from simple grand larceny or other theft crimes.

This crime is punished exactly the same as larceny, so where the value is less than $200, punishment maximum is 1 year in jail and $2500 (the same as petit larceny). Where the value of what is taken is more than $200, the punishment is the same as Grand Larceny and the punishment can be up to 20 years in prison. However, while the laws describe the same punishment, judges and juries often punish this crime more severely than simple larceny because of the nature of the crime. Each case is different, but where a person steals from the company they work for or a trusted friend, it is often considered a more egregious offense than simple shoplifting or other theft crimes.

Many of the same proof requirements that exist with larceny are present in embezzlement cases as well, so the prosecutor must prove that the person charged actually intended to permanently take something, and that the something had value. The nature of the relationship must be established as a fundamental element as well; so it must be proven that the person charged only had access to the money or property because they were an employee or had some other special type of business relationship. A boss or company owner may be guilty of this offense as well, however; bosses have been found guilty of embezzlement for keeping tax refunds, salary or other money owed to employees.

If you are charged in Virginia with Grand Larceny, False Pretenses or Embezzlement, a good defense makes all the difference in the world. Financial crime charges require a specific type of defense and a lawyer who specializes in this type of practice.